REVIEW:
Hoosier style.  Since 1986, Bazbeaux has set the Indianapolis pizza standard. Like typical Midwest style pizza, Bazbeaux offers a lot of topping options upon a relatively thin crust but with significant improvements on both accounts.  One look at the menu reveals nearly 60 toppings including traditional, exotic and premium varieties.  Mix and match to create a virtual infinite number of possibilities of topping combinations including lump crab, black bean dip, and pine nuts. Another improvement is in the crust itself.  Instead of being a mere edible vehicle for toppings, the crust at Bazbeaux has a bisquit-like flakiness which adds to both the taste and texture of each slice. I recommend ordering one of the many signature pies.  The Colossus is my favorite. While I did enjoy the fresh basil, garlic, sun-dried tomatoes and cheese of the Bazbeaux Special, the meat on the Colossus added the perfect savory balance.  Loyal patrons in Indiana have led to expanding twice and, if all goes well,  I hope a Bazbeaux will open up near me. 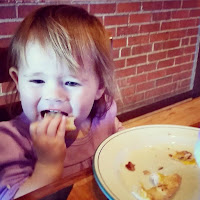 1. I met my niece Annie for the first time.  I was also lucky enough to be there when she had her first bite of pizza.  She likes it!
2. Bud and Melanie Dasher took Robin Rothman and I and their two kids out to the Piney Acres Farm for an afternoon of gem mining, corn maze meandering, pumpkin patch selecting, and hayriding.  It was awesome!