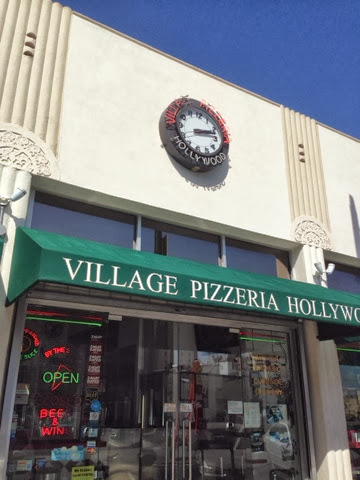 REVIEW:
A quintessential NY slice in LA.  If you're in Hollywood looking for a thin, foldable triangular slice of pizza with a thicker outer rim seeping orange oil, look no further than Village Pizzeria.   With all the NYC memorabilia surrounding the dining area, one might think they were in a Times Square souvenir shop, if it weren't for the fact its rather spacious and sparklingly clean.  I recommend the standard cheese slice.  Expect an irregular brittle crust and a paper thin underside cooked in a gas powered deck oven with more cheese than tomato sauce.  Also expect to like it.  I did. 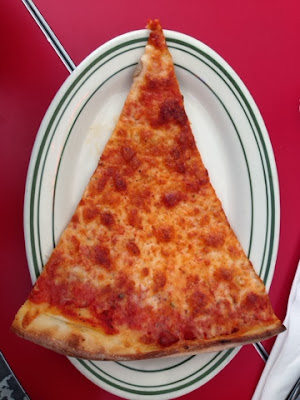 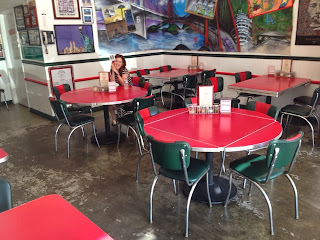 MISCELLANEOUS:
1. Ben Oren and his wife Melissa Oren are not only married but writing partners.  They are currently working on a project called The Best Friend which has nearly reached its kickstarter goal.
2. Tony Carnevale is coming back to New York City for a rock and roll show called E-TV.  He and Robin will both be singing lead vocals with the amazing Terry Jinn on guitar.
3. Robin Rothman and I visited the Roosevelt Hotel in Hollywood.  It was on the stairs that apparently Shirley Temple had her first tap dance lesson.  Robin did a little soft shoe tribute.
4. Village Pizzeria has a mural with a landmark from Brooklyn, San Francisco, and Los Angeles - three places I look to visit this pizza month. 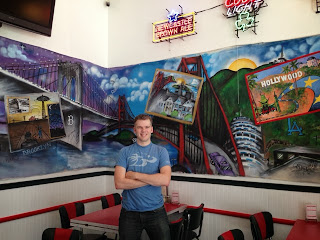