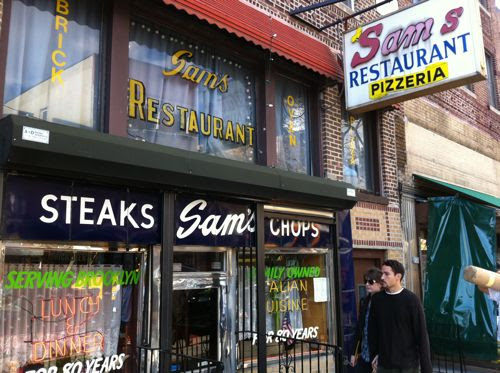 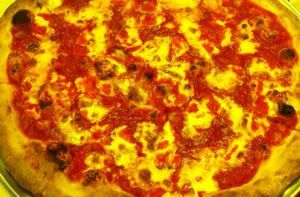 From the outside of Sam's Restaurant, you wouldn't guess that this is a place to get high quality brick oven pizza. Heck, you might not even think the place is still in business. But it is and has been for over 80 years. If there is any doubt look no further than the retro neon lights and vintage hand-painted signs clearly representing yesteryear.

One step inside and the place opens up revealing a wide-open dining area, a full bar, and walls plastered with iconic photographs of older times. You might think you stumbled onto the set of Sopranos. This could be because you have. Sam's Restaurant has been featured on the Sopranos and the photos with James Gandolfini and other cast members indicate it is a source of pride. Sam's Restaurant should also be proud of their pizza. 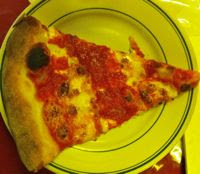 Louis Magliaccio, the current owner of Sam's, eats a slice of his own pizza nearly every night for quality control and, well, because he loves it. He is also constantly scouring the market for the best tomatoes for pizza sauce. The sauce on our pizza was the result of multiple types of whole peeled Italian tomatoes combined with rich tomato puree and infused with other herbs and spices. There was also copious amounts of it beneath the creamy Polly-O mozzarella. And the crust kept it all together (in more ways than one). It was firm enough to contain the toppings yet chewy enough to eat by itself illustrating one of the benefits of eighty plus years of food preparation.

Bring cash and plenty of time as Sam's does not accept any credit cards nor any "attitude." The flip side of "not rushing the guests" is that service does not want to be rushed either. I love the personal attention we received from Louie, the owner/waiter/bartender at Sam's. I also noticed the other guests getting a chance to converse with him as well. He's a friendly guy. Of course, if you don't want a new friend or a new favorite pizzeria, you probably should go elsewhere.

MISCELLANEOUS:
1. I met Louis Magliaccio, the owner of Sam's Restaurant. His father, Mario used to own Sam's so everyone assumed his father's name was "Sam," thus making him the "son of Sam." Louis prefers not to be called that. 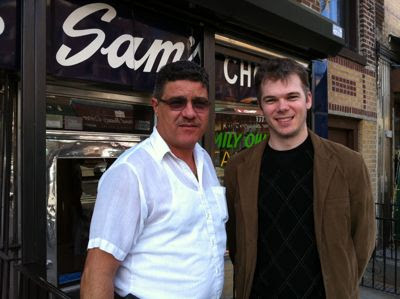 2. This was the last pizzeria on Scott's Pizza Tour of Brooklyn. By the time it ended I was so full but Scott warned, "Around 7pm, you will get very hungry again." He was right.
Posted by Sean Taylor at November 01, 2010