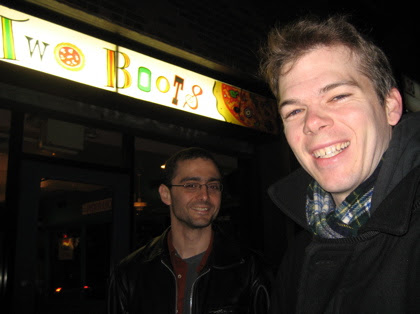 PIZZA REPORT: Oldie but a goodie.  Normally I do not like old pizza but Two Boots makes a quality product that tastes almost as good old and cold as new and hot.  I think this is because the toppings are so unique here.  Two Boots is named for the geographical shapes of the locations that influence their pizzas - Italy and Louisiana are both shaped like boots.  Although I am forever indebted to the Italian mainland for creating such a perfect food, the Cajun flare on my Bayou Beast really set it apart from any other slice I have had all month.  Toppings such as andouille, bbq shrimp, crawfish, and jalapeno blend together with the mozzarella atop a very thin yet firm crust to produce a delectable slice of pizza.  The only thing that could have been improved was the age of the slice.  Order a pie as opposed to a slice and you won't be sorry.  My Mild Margherita slice was served on a square Sicilian slice with marinara, fresh mozzarella, and basil.  I know, Siciliy is not part of the boot of Italy.  You are right. Sicily is the ball the boot is kicking into the Mediterranean. Had my slice been prepared perfectly, I would have written "GOAL!" but it wasn't.  The cheese was either not in the oven long enough or the oven was not hot enough.  Instead the pieces of fresh mozzarella remained hardened gelatinous masses.  Granted they tasted delicious but the consistency was a bit distracting.  Once in my mouth, the combination of the flavors did work really well together and the crispy outter shell/crust proved to be a good vehicle for getting these flavors to their destination.  All in all, Two Boots makes some pretty solid pizza.
ATMOSPHERE: Now I know, Sunday on the Eve of Halloween Eve is astonishingly crowded.  The streets of the East Village and Two Boots itself was swarmed with costumed people.  Since we elected to go to the slice place (across the street from the sit-down place) there were fewer seats, all of which were occupied when we arrived.  Being filled to capacity also meant the level of noise was a little ridic' (ridiculous).  The saving grace was the Mets pennants hanging down from all around the interior of the store.  Now when I think Two Boots, I think Amazin'.
VERDICT: 3.5 out of 5

MISC.: Stuart Hillman and I talked about marching bands, wall hangings, and even spoke to some random patrons that happen to be sitting next to us.  Oh we also used, misused, and abused the word "nefarious".