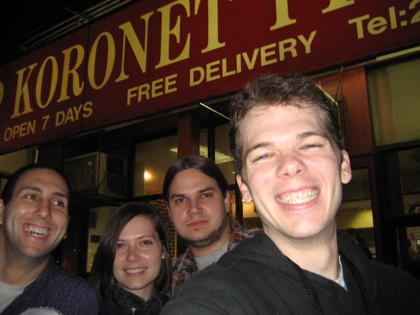 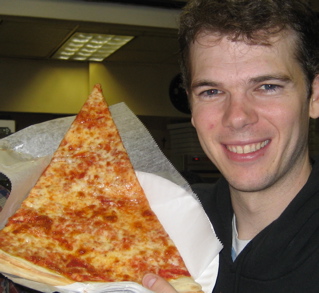 (Koronet slice is bigger than my head...and I have a big head!)

PIZZA REPORT: Size matters.  Koronet serves huge slices of pizza.  My slice must have been nearly 18 inches from crust to tip, but, on top of that, it tasted pretty good.  Despite using standard shredded mozzarella cheese and relatively typical tomato sauce, the freshness of the slice gave it an edge over the usual New York slice.   Hot out of the oven I quickly devoured the oily beast.  It was particularly oily due to the mere quantity of cheese it required to cover it.  The crust was rather flavorless and the sauce did not extend out far enough to help out either.   Furthermore, I would have preferred a bit more size.  I did have enough and the novelty of being able to get a slice that big so late at night will likely bring me back.
ATMOSPHERE: All night long!  It was around midnight when we arrived but there was a line out the door.  Columbia students, police officers, and pizza month compatriots flocked to Koronet for the entirety of our stay.  The line did move quickly and pizzas continued to be made, cooked, and served.  While there were about 40 places to sit, it was not the cleanest nor acoustically pleasant location.  If you want a big slice at a decent price anytime of the night, go to Koronet.
VERDICT: (Koronet) 3 out of 5

MISC.: Matt Floyd and Valerie Taylor talked to me while the Mets were mounting a potential comeback in game 7 of the NLCS.  They couldn't do it though.  We then met up with Christian Capozzoli and discussed Teenage Mutant Ninja Turtles, the Okefenokee swamp, milk shakes, lip rings, and the Seinfeld diner.

Click to play in your browser
Posted by Sean Taylor at October 19, 2006