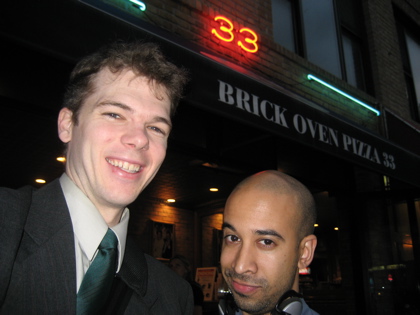 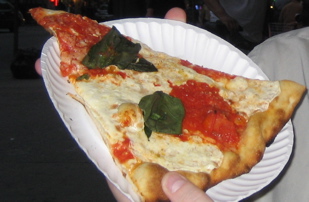 PIZZA REPORT: Better with Brick.  A typical New York slice plus a brick oven equals a better New York slice.  My Margherita slice, despite being "reheated" had most of the makings of a freshly baked brick oven slice.  The underside of the crust was firm yet chewy, the outer edge was charred in places, and the whole slice heated thoroughly.  One of the drawbacks of "re"heating the slice was that the outer edge became a little too solid for me to gnaw my way through.    Had I chosen a slice that was part of a pie recently cooked or ordered a whole pie I am convinced the crust would be soft.  Also, the basil leaves would likely have appeared less old and withered.  I was pleased Brick Oven Pizza 33 offered a fresh mozzarella Margherita slice.  It is not often a quick slice pizza joint offers a slice with such quality ingredients as fresh mozzarella, basil, and Italian seasoned tomato sauce.  The sauce was my favorite part but, unfortunately, it was spaced out in pockets leaving me several "dry" bites.  Overall, I was impressed with the value at Brick Oven Pizza 33.  Quality ingredients, cooked in a brick oven for only a slightly higher cost of a typical NY slice of pizza.
ATMOSPHERE: Brick Oven Pizza 33 is aptly named because a large portion of the store is occupied by the brick oven itself.  This is a 'quick slice' pizza place so it is no wonder there are only 4 tables and a counter top in the dining area.  We ate on the "fifth table" which sat just outside of the restaurant door on the sidewalk of 23rd Street.  Not surprisingly, it was rather loud.  It is also important to note that there is only one set of seasonings for everyone.  Of course, if you get the Margherita, there is no need to add any garlic, pepper, salt, or oregano.
VERDICT: 3 out of 5

MISC.: Matthew Shafeek and did some last minute preparations for the debut of my talk show called The Spotlight with Sean Taylor (highlights to come).  Matt is my sidekick.

Click to play in your browser
Posted by Sean Taylor at October 18, 2006