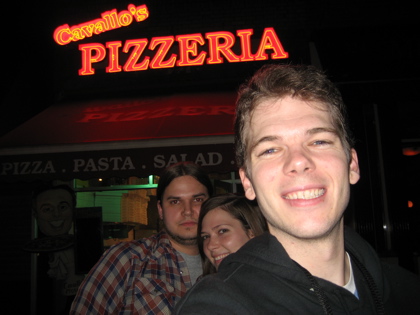 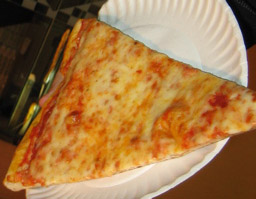 PIZZA REPORT: 11th hour pizza.  I did not expect a fresh slice of pizza just before midnight at Cavallo's and, well, did not get one either.  I did get a very solid example of a typical New York slice of pizza.  Once it was tossed into the oven to be reheated, it emerged revitalized.  The crust was firm yet soft and relatively even.  I was particularly impressed by the cheese and sauce distribution.  I am in the area often so I am likely to go back.
ATMOSPHERE: Cavallo's has all the bases covered (and I am not alluding to the situation in the 9th inning of the 7th game of the NLCS when Carlos Beltran took a called third strike).  It has several seats along the the counter as you enter and even a few tables in the back.  There are a couple of televisions playing (but not too loud) and some employees talking with each other in Italian.  The seating area is in the back, far from the noise of 7th avenue.  The stench of some cleaning agent permeated the air but that was likely because we arrived around closing time.  If you are in the area and want a solid slice of pizza served by a nice Italian guy, then Cavallo's is perfect.
VERDICT: (Cavallo's) 2.5 out of 5