REVIEW:
Hark! The pizza angels sing. Named in honor of Angelo Angelis, midtown’s Angelo’s coal-fired ovens are churning out some of the best old school New York style pizzas in the city. Although the pizzeria has only been around since 1998, great pizza has been in the Pashalis-Angelis genes for generations. What began with Angelo Angelis's original Pizza Chef in Brooklyn has led to an extended family tree responsible for Nick’s in Forest Hills, the Patsy’s franchises, Adrienne’s Pizza Bar downtown and Pietro's in Philadelphia. Relying on time-tested recipes, top quality ingredients, and a dependable baking technique, Angelo's (like its many sister/cousin/grandfather restaurants) maintains a tradition of excellent pizza created by Italian immigrants in the early 20th century.  I recommend the hand cut pepperoni that curls up into little cups.  Also, expect the signature black char on the outer edge and  underside of the thin crust.  Both are results from dough being heated at temperatures nearly 1,000'F.  Unlike most great pizzerias in the city, Angelo's pizzerias are located in very tourist-heavy areas. This is one of the reasons long-time residents have probably never been.  Great pizza might be the only thing that tourists, residents, natives can all get behind. If that's the case, we should all get behind Angelo's.


MISCELLANEOUS:
1. Erik Tanouye had Diana Matuszak are recently engaged! Also, Erik just had a birthday - I am slightly envious that his birthday always falls in the middle of Pizza Month (October).

2. Diana and Erik are involved in a Community-Supported Agriculture (CSA) program so they get fresh organic produce directly from local farms.  Sometimes they use those ingredients on pizza they make at home. 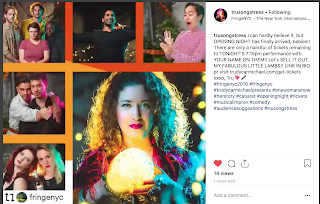 3. Robin Rothman's NYC Fringe show starts Saturday, October 13th at 7:15pm (tix here).  She's got programs and everything for it. After opening night, we're grabbing a slice with anyone that wants to accompany.  In the meantime, I recommend following her character's instagram feed @trusongstress

4. After pizza, I brought the leftovers to my softball game and my teammates were thrilled!  Alyssa See, Rachel Fulton, Natalie Evans and I were "powered by pizza" in our loss. The pizza made losing a little easier to swallow.