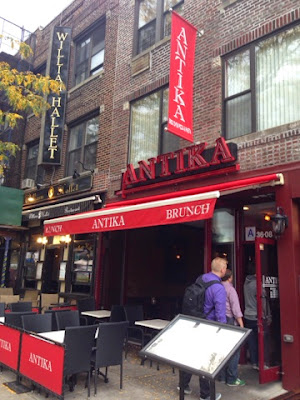 REVIEW:
Just like grandma makes...only better.  Thanks to Antika, there is a warm seat and a great group of people happily awaiting your arrival at this Astoria pizzeria.  Named as an homage to Antica Port'Alba - arguably the oldest pizzeria in the world - Antika creates an atmosphere that is much more mature than its years.  Bring your appetite because the price of the Old Fashioned Grandma Style Square Pie may be small but the pizza is big enough for a family. Despite their simple appearance, the taste is very complex.  These rectangular cookie sheet shaped pizzas are loaded with four types of high quality cheeses, savory San Marzano tomato sauce, extra virgin olive oil and oregano.  The twice-baked gas-powered crust provides a sturdy foundation for the toppings that is surprisingly filling and yet seemingly light at the same time. Couple the pizza with one of the many top flight craft beer options and you may never want to leave. Not only will I be back but I feel like Antika looks forward to my return.


1. Brad Kemp is a musical director from Chicago who is in town to play for the 6th annual New York Musical Improv Festival at the Magnet Theater.
2. Alan Fessenden and Michael McLarnon both perform improv comedy at the Magnet Theater on a weekly basis.
3. We walked right by Quinton Loder and Ginny Humber and asked them to join our Pizza Crawl but they were pretty busy moving Ginny into her new digs.  They did mention that they had already eaten pizza and intended to eat the leftover pizza later on so, it's all good!
4. The bartender seemed excited by our pizza crawl and even made us drinks with Nutella.