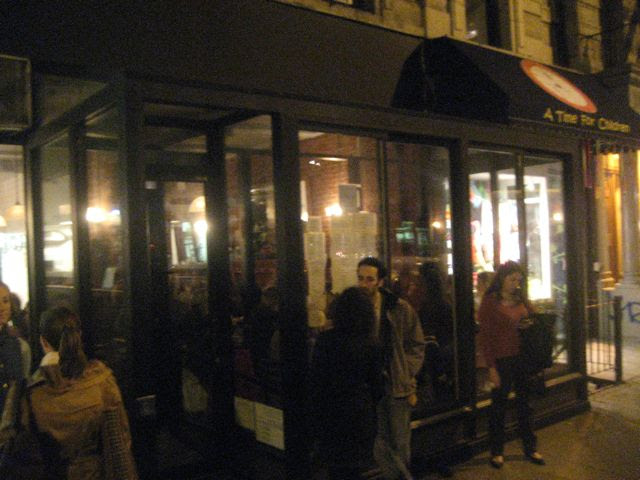 GUEST(S): Hanna Chase, Mark Lee
REVIEW:
Pizza...it's Celeste you can do. This popular Upper West Side Italian restaurant also serves decent pizza. We were the only ones that I could see in the cozy, romantically lit room to order pizzas. With a beautiful wood-fired brick oven staring back at us from the corner, I took it upon myself to find out why. 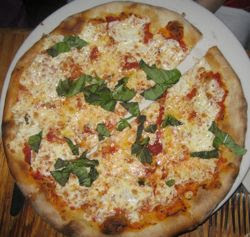 I began to salivate when the Margherita arrived. Copious amounts of fresh mozzarella cheese layered atop the thin wood-fired crust made for an idyllic canvas for the basil and olive oil. Appearance-wise, it looked fine. What it lacked was in the flavor department and where it lacked it was in the crust. Once the cheese and the [a bit too sweet] sauce ended on each slice, the crust lacked any zest, kick, spice, or pep. It reminded me of an unsalted pretzel. 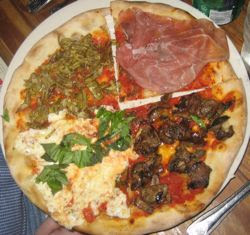 This was a common theme for our other two pies as well. The Quattro Stagioni (the "Four Seasons") emerged as my favorite. Comprised of slices containing artichoke, mushroom, prosciutto, and fresh mozzarella, this pie offers plenty of high quality ingredients sure to stimulate most any human's taste buds. You're on your own when it comes to the crust though.

A reason to go back to Celeste is the daily specials. Different antepastas, entrees, pizzas, and desserts are featured each day.

We indulged and ordered the featured pie containing radicchio and speck (smoked prosciutto). The pun-lover in me wants to say it was radic-ulous and speck-tacular but really it was just pretty tasty. And, considering how much it cost, it was just about adequate.

I may return to Celeste. After all it is a very quaint Italian restaurant which is really popular. But, I will follow the other patrons lead and order the non-pizza menu items.


MISC.:
1. Mark and I met during Pizza Month 2002. We both did improv at the UCB theater. Hannah and I both went to Dartmouth where we both did improv. Hopefully we'll all meet again and do pizza inspired improv together.

2. Be on the lookout for Celeste. The sign is small.