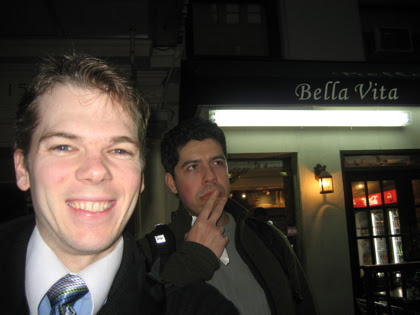 PIZZA REPORT: If I would have read my pepperoni slice before I ate it, it would have said said something like "You will enjoy fresh mozzarella cheese, tomato sauce, and plenty of hand cut pepperoni if you choose to eat me...ps this slice will self-destruct."  And self-destruct it did - but for all the right reasons.  Too much pepperoni.  Not just any pepperoni but the extra spicy kind you rarely find anywhere but hanging in a deli.  The grease from the pepperoni contributed to the collapse of the slice but, more importantly, it contributed to its deliciousness.  Moisture from the grease kept helped revitalize the slice when it was placed back into the brick oven.  My cheese slice, on the other hand, was not so lucky.  Despite having fresh mozzarella cheese and a uniform crust, the sauce dried out in the cooking process.  This likely occurred for two reasons.  First of all, the sauce towards the edge was not covered due to fresh mozzarella cheese being centerloaded.  The second reason was that my slice came from an old pie.  Centerloading and age are a tough double-whammy to overcome.  I prefer too much pepperoni.  That was a good problem to have.  Making the best of the situation, I used some of the pepperoni surplus to help stomach the old dried up cheese slice.  Mission accomplished!
ATMOSPHERE: Although Bella Vita cannot assure you of a "beautiful life" it can assure you of a quick better-than-typical New York slice which is beautiful in itself.  Tucked in the center of midtown Manhattan a mere block from Central Park South, you would not expect to find a pizza place that sells high quality brick oven cooked pizza at an affordable price.  Well, start expecting!  The dining area consists of only a few tables but the small size enables the temperature to be comfortably regulated by the heat from the brick oven in the back.   If you're in the area and want a beautiful slice beautifully quick, then stop by Bella Vita.
VERDICT: 3 out of 5

MISC.: Matthew Stillman and I talked about convertibles, central park, bikes in the city, and then we went in a pedicab.  Here is a photo of our view from the pedicab. 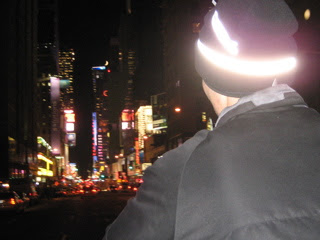 Click to play in your browser
Posted by Sean Taylor at October 26, 2006