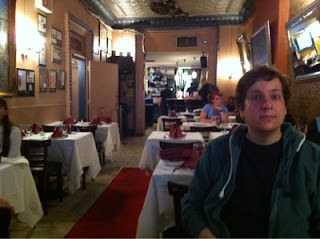 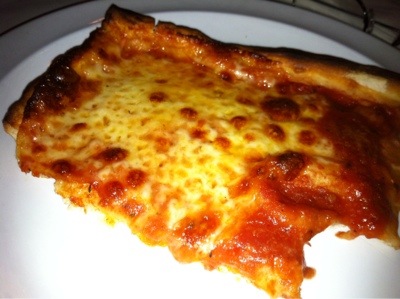 Tangy tomato trays. The last time I had pizza cooked on a cookie sheet, I was at lunch in my high school in Florida. I liked it there and then but I love it here and now. Lazzara's pizza is made with premium ingredients on a uniquely solid crust in a very hot oven (unlike my high school on all accounts). My favorite part of Lazzara's pizza is the sauce. It tasted a lot more tomato-y than other pizza sauce but I welcomed the change. I was amazed at how stiff the crust remained under the strain of the thick sauce and heavy toppings. The pepperoni slice had shredded spicy pepperoni which really mixed well with the tangy sauce. The Margharita slices had fresh mozzarella cheese, which I love, and thinly sliced tomatoes which I like (in moderation).

ATMOSPHERE:
Shhh...Lazzara's must be one of Manhattan's best kept secrets. I don't want to blow its cover either. How a delicious and well priced (~$12 person with tax and tip, w/o alcohol) pizza place with plenty of seats and nice music could be uncrowded in the middle of midtown during dinner means it must be a secret. I know it's closed on weekends and hear it's pretty busy during lunch but we were the only people in the store at 7p. I want to go there for every dinner. Care to join me? Psst...don't tell anyone else though. Let's keep Lazzara's between the two of us.

MISCELLANEOUS:
1. Jon Bander was a finalist on the New Yorker caption contest this past month.  I have no doubt he will do it again.
2. Bander was part of the only two person improv performance I have ever been a part of.  We were called TayTay and the Band. 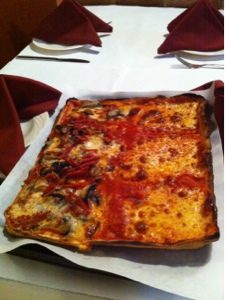 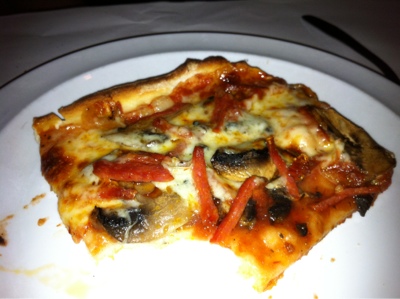