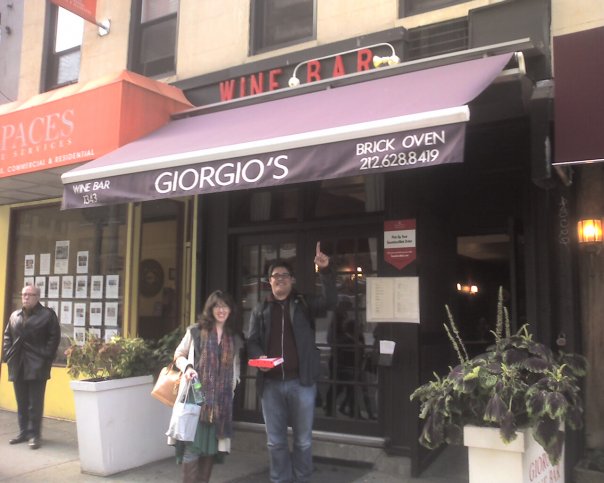 GUEST(S): Rich Sommer, Robin Rothman
REVIEW:
Wine and Cheese...slice. Giorgio's is a Wine Bar that sells brick oven pizza by the slice. If the wine is anywhere near as good as the pizza, then that some tasty wine!

Take, for instance our four cheese pie with pepperoni. Which four cheeses?

Once identified, I could see and taste each one due to the different colors, textures, and, of course, flavor. But what an amazing flavor combination! Tack on to this the pockets of tomato sauce all atop a gas-powered brick oven crust and you got yourself a lactose laden tour de force.

If oil bothers you, skip the pepperoni. The cheeses alone will probably more than enough for the napkin dabbers.

Cost-wise, this is as reasonable as any wine bar in the Upper East Side could be. They had many other pies in the display case that looked enticing. I hope to visit again and try a few out to see if the reheated brick oven slices are as fresh as the new pie. And, while I'm there, I maybe even order some wine.


MISC.:
1. Rich is a cast member of one of my (and Robin's) favorite TV shows. It's called Mad Men and it's on AMC. He's also a hilarious improv comedian...despite what he says. 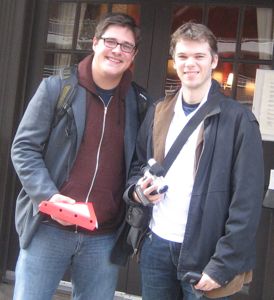 2. I was recommended this pizza place by Rich who explained this was his favorite pizza place before leaving NYC for Los Angeles. He relayed a story about how he and his wife ordered the same type of pie we eating and made a deal with Giorgio's that he would pay for the cab for the delivery guy to bring it to him. He said, "with the price of the cab, it may have been the most expensive pizza we had ever eaten, but also, the best!"