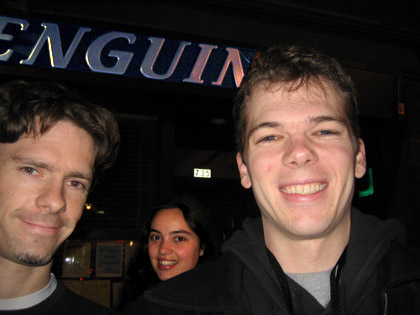 PIZZA REPORT: If penguins make pizza anything like Penguin Pizza, I'm moving to the North Pole!  I tried both conventional and unconventional toppings and was as pleased with them both as I was pleased with myself for being so adventuresome.  The conventional pizza, the Margherita, was topped with spice-rich sauce and 4 different types of cheese (fresh mozzarella, parmesan, swiss, and Monterey jack).  Despite the cheese tendency to lean towards the center, it was too evenly cooked to be "centerloaded".  The crust was firm yet chewy and tasted like freshly baked bread.  It was also sturdy enough to not mind being folded (which I do now out of habit).  The Boston-folk did not seem to mind me folding the pizza either.  The other type of Penguin Pizza I consumed was the Caribbean Jerk Shrimp.  This pizza has no sauce on it (note to self, read menu description closer).  It does, however, have pineapple, banana peppers, and spicy shrimp surrounded in a sea of fresh mozzarella.  I enjoyed it.  More shrimp would likely have been more enjoyment but the flavor it had was a very unique one.  Also, a couple of medium pizzas at just over 10 bucks each will more than fill up three people.
ATMOSPHERE: Penguin is a hybrid of a bar and a restaurant.  Although I cannot attest to the contents of the bar portion, it did have multiple televisions at every sightline, several bar stools, and a fully loaded juke box.  Sometimes the tunes were a bit loud for the patrons of the restaurant side but the songs were, for the most part, pretty good.  Our table was set off from the bar just enough to avoid foot traffic yet be well within sight of our friendly waitress.    If you're in Boston, go to Penguin Pizza.
VERDICT: 3.5 out of 5

Click to play in your browser
Posted by Sean Taylor at October 08, 2006