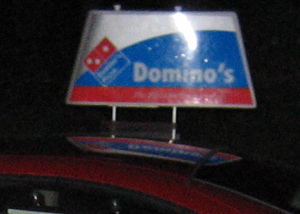 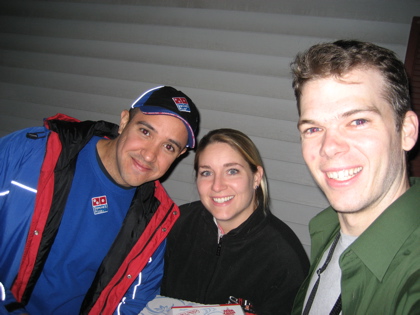 PIZZA REPORT: Domino's pizza delivers.  Not only did they arrive in less than 30 minutes, but they made it by midnight, thus preserving Pizza Month 2006.  The successful race against the clock made my first slice, the pepperoni, taste all the more better.  As I quickly devoured it, the soft and chewy handtossed crust was still warm from the delivery bags.  I'm afraid the pepperoni provided most of the flavor since the cheese slice (or rather section, since it was cut Chicago style), hardly had much taste at all.  I preferred the doughy handtossed crust over the cracker-esque thin crust but both supported the weight of the sauce and toppings sufficiently.  Maybe it's because I grew up in the suburbs but Domino's sauce is more like the baseline I judge other pizza sauces by so, suffice to say, it's good.  After all, I love pizza sauce so even the sauce baseline has got to be good.  With Domino's pizza, you know what to expect and it delivers.
ATMOSPHERE: The sign on the driver's car was very well lit and securely attached to his car.  The delivery man himself was dressed for the season (first cold day of the season) and represented Domino's famously.  He even obliged my request for a photo.  He wore no less than three Domino's logos (hat, jacket, shirt) and was very courteous.  His car was clean and ran well too.
VERDICT: 2.5 out of 5

MISC.: I was in Boston to visit my friend Nat for his 30th birthday party.  We played pong all night to somewhat relive some college days.  Here's a photo of pong and pizza...two of my favorite things. 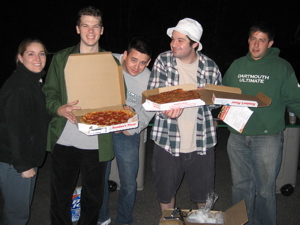 Click to play in your browser
Posted by Sean Taylor at October 06, 2006