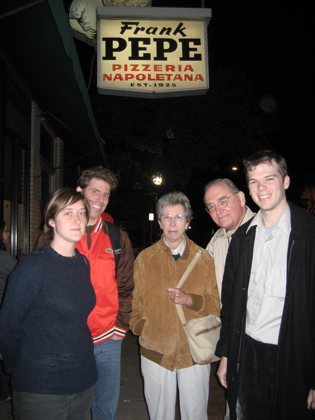 PIZZA REPORT: Connecti-cut above the rest.  This pizza is amazing.  The bacon and cheese pie ranks up there with the best pizza I have ever consumed.  Frank Pepe's creates pizza that looks as good as it smells, tastes as good as it looks, and, sure...smells as good as it tastes.  The fresh mozzarella is used generously yet evenly throughout providing the perfect sea for the well distributed bacon to float upon.  This body of deliciousness is neatly contained within the confines of a sturdy coal fired brick oven crust.  With the sheer amount of cheese and tomato sauce, one might expect the underside of the crust to either soak through or threaten the architectural integrity of the slice.  On the contrary, the crust remained so crisp and firm that even the last slice I ate (bacon slice pictured below) could be held horizontally by the outer edge alone without any drooping whatsoever. 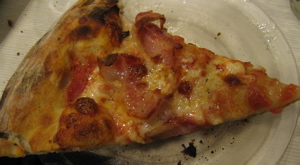 On top of mastering the "tomato pie", Frank Pepe's is also one of the first pizza places known to offer the Clam pie.  Although it has no tomato sauce or cheese, the combination of the clams, garlic, and coal fired crust produced a concoction good enough to make even me eat seafood.
ATMOSPHERE: Old fashioned perfection.  According to the sign out front, Frank Pepe's opened up in 1925.  Some of the booths, tables, and signs have been around for nearly as long.  After the 20-30 minute wait (which I am told was less than usual due to the cold weather), you are welcomed into a warm, clean, and spacious pizzeria.  Straight ahead is the massive coal fired brick oven which nearly stretches the width of the restaurant.  Aligning all the walls are wooden booths varying in size to seat between 2 and 8 people.  Even at the big tables, the seats are close enough for everyone to be heard.  People come to Frank Pepe's from all walks of life proving that great pizza appeals to every age, race, and creed.  Having had to take a 90 minute train ride to and from Grand Central Terminal I can honestly say that this was worth the journey to New Haven.
- SIDE NOTE - Beware of the bar holding up the table as you enter and leave your booth though.  While we were there, a guy hit his knee so hard he sat in agony for several seconds before regaining his composure. 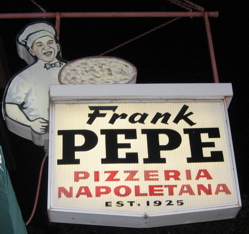 Click to play in your browser
Posted by Sean Taylor at October 13, 2006