REVIEW:
New Jersey pizza dynasty.  There is no way when Nicola Bevacqua founded the Reservoir Tavern back in 1936 that he could have foreseen it might still be around over 80 years later, still being run by his family and having firmly established itself as a pizza institution,  After all, he opened his Italian kitchen in Boonton, New Jersey, a small town that has seen its fair share of industries come and go since its founding in 1761. First there was the Ironworks, then a silk factory, then a hard rubber company, then there was the molded plastics and even an edible oils company opened up shop in Boonton only to eventually close so why should an Italian restaurant be any different? The answer is in the pizza! Erratically shaped pillowy crust make each pie unique while the signature topping combinations make each pie delicious. I recommend the Danno's pizza which combines flavorful shrimp and melted mozzarella with a rich vodka sauce and fresh basil. If you're sharing with a friend, get the slice with toppings distributed as close to the edge as possible. The brick oven crust has a surprisingly light and airy consistency - given its puffy nature - but nothing can compete with the superb flavors of the creative high quality toppings. Given how affordable everything on the menu is, next time I plan to order some of the non-pizza Bevacqua family recipes.  Oh, but I will also order Reservoir Tavern pizza...and plenty of it! 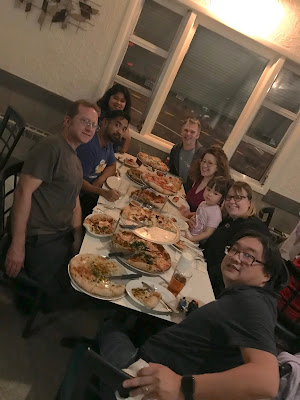 1. Robin Rothman has tickets available for her Fringe NYC show. Please come! Here is a link for tickets.  She will be busking on the day of her first show to get folks to come.

2. John Loiacono plays the bagpipes.  He's played in two bands, parades, funerals and even in Scotland!

6. Christine Riddles was an online dating pioneer and living proof that it works.