ORDER: 3 slice of a large pepperoni

REVIEW:
Gotta visit them all!  Patsy's is the perfect counterargument for people that believe that there is no such thing as good chain pizza.  As half a dozen Manhattan areas will attest, a Patsy's Pizzeria is a welcome addition to the neighborhood. Associated to the 1933 Harlem original in name only, the chain locations also serve masterfully prepared pizza in high heat ovens. Unlike huge franchises, this pizza chain allows some individuality at the different restaurants.  For instance, the Upper West venue's oven is fueled by wood whereas others cook using anthrocite coal.  Although wood does not burn as hot or as clean as the coal, it is more traditional and leads to a softer crust.  Regardless of the Patsy's, expect the pizzas to come with melted fresh mozzarella cheese, generously applied tomato sauce, basil leaves, olive oil, and a signature char. Meat eaters must try the hand cut spicy pepperoni. I affectionately call them "grease buckets" since the high heat drys out the oil from the outer edge causing it to pool into the center of the now concave savory container. The result is pepperoni perfection every time!

1. Robin Rothman performed at an event affectionately called Stoopfest thanks to my friend from softball Dan Blednick and his girlfriend Shelly George.  Neighbors gathered outside their UWS apartment building (built in 1890) and caught up while Robin played and sang.  The highlight for me was watching a passerby's 2-3 year old girl stop dead in her tracks to watch Robin sing "Let It Go" from the Frozen soundtrack.
2. After the pizza I came home and watched 6.5 great innings of Game II of the NLDS between the Mets and the Dodgers and then one of the most bizarre calls ever made on Chase Utley's take out slide to break up a potential double play in the 7th inning.  The resulting ruling left the Dodgers with the win and Mets shortstop Ruben Tejada with a broken leg.  Here was my comment which I still stand by (7 hours later) on Facebook I made while tossing and turning trying to get to sleep... 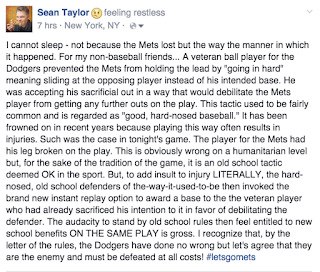