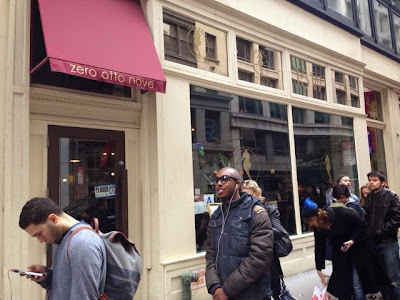 REVIEW:
A new favorite.  Named after the first three digits of chef Roberto's Italian phone number, Zero Otto Nove is now available in the 212 area code!  Since it opened in 2008, Zero Otto Nove consistently finds the top of lists ranking New York City pizzerias but its original Bronx address has kept it a relative secret.  But now, thanks to owner and chef Roberto Paciullo, there's a new Zero' in town! And not just anywhere, but near one of the busiest intersections in Midtown Manhattan.  Combining tried and true recipes from the original and another successful endeavor called Roberto's Restaurant, the midtown Zero Otto Nove menu is packed full of upscale Southern Italian influenced dishes and pizza.  At the far end of the extremely spacious-yet-rustic dining area sits a intricately tiled imported wood-fired brick oven.  The well trained pizzaioli quickly transform balls of dough into high quality ingredient laden masterpieces.  Each Margherita is layered with a generous amount of imported San Marzano tomato sauce, fresh mozzarella cheese, rich parmigiano and diced basil before being baked to perfection with a crisp-yet-chewy outer edge.  Be creative and try the popular La Cirilo which combines butternut squash puree, cream of truffle, mushrooms and fresh mozzarella for a unique and delicious eating experience.  I recommend ordering at least one traditional and one signature pie because at Zero Otto Nove, they can do it all and with the crew of friendly servers cutting and serving each slice, they prove it. All you have to do is eat it. I'm looking forward to doing just that on my next (of many) visit.


MISCELLANEOUS:
1. Rob Penty and Michael McLarnon and I are three of the computer programmers that help MagnetTheater.com function.  We also are three performers there.

2. It turns out that cappuccino is singular in Italian so if you ever order more than one, you can say "cappuccinos" but know that Italians say "cappuccini."