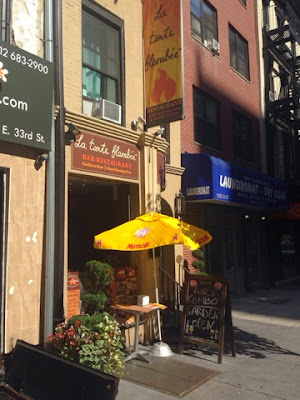 REVIEW: C'est magnifique!  La Tarte Flambée is not just the name of this quaint porthole to Europe but it is also the name of its signature entrees.  French for "pie cooked in flames," la tarte flambées are crisp, rectangular topping-rich flatbread from the Alsatian area of France.  "Flammies" with ingredients such as crème fraîche, Gruyere, and bacon are essentially French cuisine in the shape of pizza.  Owner Mathias Peter, an Alsatian himself, created the menu around his native preferences.  Since flammies are meant to be shared and paired with an assortment of Belgium and German influenced beverages, La Tarte Flambée offers a variety of lunch specials and party combinations in addition to à la carte options. Consistent with French food each signature Flambee is rich with flavor but, fortunately you don't have to be rich to enjoy this haute cuisine. Less than three months old, La Tarte Flambée is primed for success with tasty food, service replete with authentic French accents, an awesome weather-pending back yard that provides an escape from New York City to the peaceful French countryside. I will be back, à bientôt.

MISCELLANEOUS:
1. Fred Urfer is from Deland, Florida.  His mother and my brother work at the same hospital.  He also refers to NYC as "an island off the coast of the United States."  I agree.
2. Fred's ancestors are Alsatian, just like the flammies!
2. We were privileged to meet the owner of La Tarte Flambée named Mathias Peter.