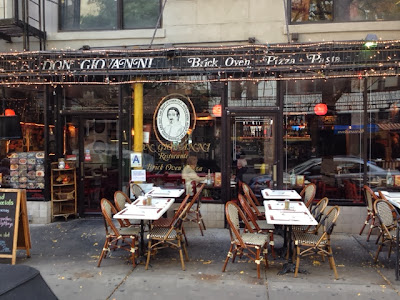 REVIEW:
Coal, crisp and creative. Don Giovanni Ristorante is no newcomer to the pizza scene.  Their coal-fired brick oven thin crusted pies have been delighting patrons for over twenty five years. Located in the theatre district a mere two blocks from Times Square, I can imagine the spacious family-friendly can get really crowded during peak times but make it a late dinner and you'll have the place practically to yourself.  Opt for the creative topping combinations.  Don Giovanni's small pie is about the same size as a traditional Napoli style pie but the toppings are anything but traditional.  Specials, which vary every day, include high quality ingredients such as breaded eggplant, capers, smoked mozzarella, along with various seasonal toppings.  These are blended together in signature pies that turn a typical pizza night into an experience.  Despite some centerloading of the toppings, the pie was very evenly cooked.  I live in the area, but even if I didn't, I would go back. 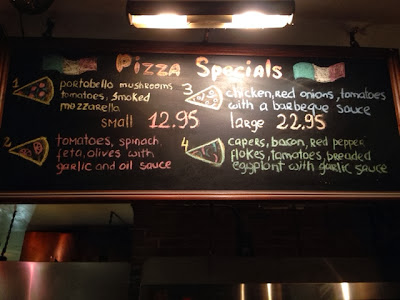 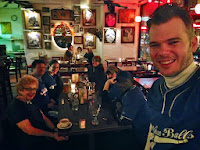 1. We are the Champions!  My ZogSports division 1 coed high arc recreational softball team had our playoffs today.  It was two games - a semifinal and then the finals.  In the semi-final game, we were down 7-3 in the bottom of the last inning and came back and scored five runs to win and advance to the championship game.  It was the most amazing rally I have ever been a part of and I had the most important role of all, I was the one wearing the rally hat.  Those things work. 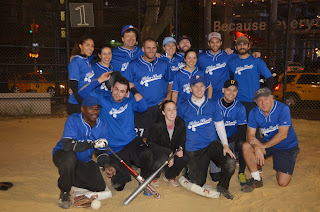 2. Helaine Kushner is an actress and performed on Broadway back in the 60's.
3. Chuck Divak was voted Most Likely to Succeed in high school.  Now that we won the championship, I think we can all agree he did his high school proud.
4. Cyrus Footman and I both wear knee braces when we play softball.  I also run into him a lot in the street when I'm on my citibike.  Apparently he works near where I live.
5. Carly Heims has a cool nosering and is the one that hit in the winning run in our semifinal game.
6. Lance Kushner bought the whole team a bunch of food and drink to celebrate the "3-peat" championship.  He said, "I can't wait till the end of the year celebration" while we were all celebrating.
7. Kitzi Taylor plans on taking part in NaNoWriMo next month with me.