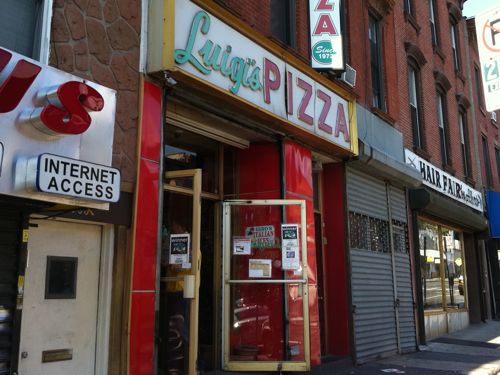 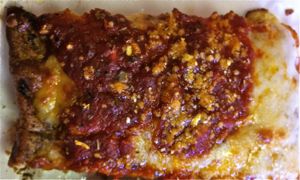 Well priced pizza, free conversation. Upon entering Luigi's you will immediately be greeted by a pizza chef. Literally greeted. Gio (short for Giovanni) talks to everyone. From school kids to the elderly, he knows 'em all. There are plenty of seats in the back of the pizzeria but if you sit back there, you can't hear what Gio is talking about, so most stand up at the counter.

"There are a lot of Luigi's in Brooklyn," said our charismatic pizza chef, "but this one was the first." 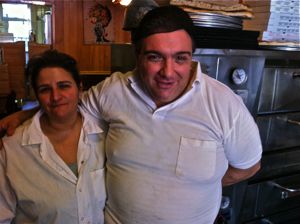 Gio's father, Luigi, passed along the pizzeria to he and his sister, Marisa. While Marisa orders the dough, Gio makes the pies. The recipes are family owned as well. Still slinging his father's cheese pies for decades, Gio recently added his own rendition of his grandma's pizza. A true family affair.

"I look at everyone in the neighborhood as part of my family too," Gio adds proudly.

And "proud" he should be. That pride plus high quality ingredients and lower than average prices is the key to Luigi's success. Combining imported Italian grated cheese with the ever rising cost of Grande Wisconsin mozzarella, it is a wonder how they can charge less than $0.50 the going the price of a slice.

I particularly like the tomato sauces, which is served in copious amounts on the grandma slice. Everything else, including the conversation, was bonus.

It's safe to say that the interiour of Luigi's hasn't changed much in its 40+ years of existence, but that adds to its charm. In a fast-paced, ever-changing city hellbent on exploiting "old school Brooklyn style" pizza, it's nice to know an old school Brooklyn pizzeria that helped create the appeal. Drop by and say, "hi."

MISCELLANEOUS:
1. Garrett Palm and I met Gio. He's the son of Luigi and the affable guy that will likely make your pie. 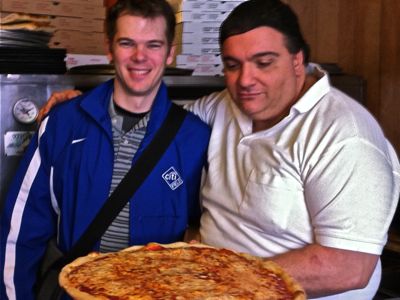 2. This pizzeria is located in a part of Brooklyn not named. It's like almost Park Slope, almost Prospect Heights, and almost Windsor Terrace. Garrett just calls it "South Slope" so that's what I call it too.
Posted by Sean Taylor at October 19, 2010

Sean, this looks like the place nearby my old apt in "Sunset Park Slope"...it was tasty pizza, but I seem to recall scrumptious zepoles in a paper bag, too. Mmm.