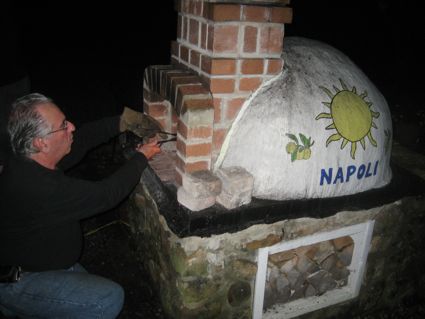 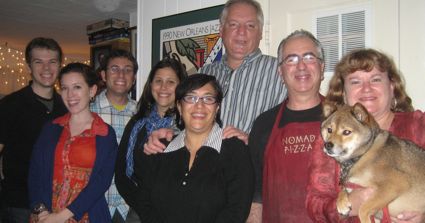 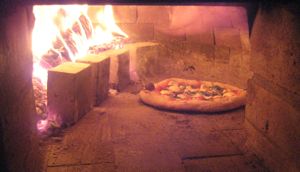 Golly Gee, Paulie Gee. It's nice to have friends. It's even nicer to have friends with a brick ovens in his back yard. Paulie's got one and he named it NAPOLI. Much like FIELD OF DREAMS, "If you build it, they will come." He build it, and we came. Eight of us convened in Warren, New Jersey to eat ten masterpieces by Paulie and his Oven of Dreams. 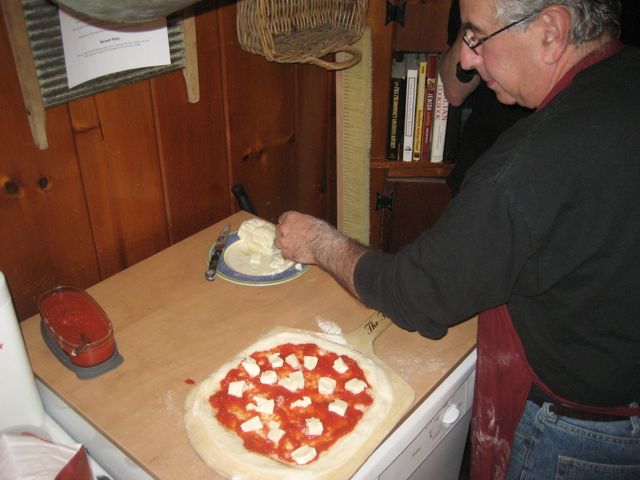 First thing we notice when we arrive is a menu. A ten course meal, where all ten courses are pizza. Perfect! We were then instructed to sit down and eat. We all did as were told and began a long evening of sharing top quality pizza together. From dough to plate, Paulie uses nothing but the finest market ingredients including his own homemade fresh mozzarella cheese and home grown basil. The sauce is superb. 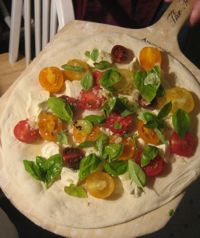 "Nothing but tomatoes and sea salt," Paulie says seemingly giving away the secret, "but I won't tell you where I get my tomatoes."
Darn! My best guess is Eden since I hear Heaven had a bad harvest last year. With sauce or not, Paulie's creations ranks up there with the best pizza I have ever eaten.
"It's all about finding the right combination of sweet and salty," Paulie claims.

The Bianco pie with figs and prosciutto adds support to that argument. My favorite pie was the one with the cherry tomato medley but I can honestly say that impossible as it may seem, there was no least favorite. I sincerely hope that others will get the honor of eating Paulie's pies. Open a pizzeria already! I mean you're an expert chef, you got a menu, table service, a secret tomato source, a voluminous recipe book... the only thing missing was the check. If you bill them, they will come and I'll be at the front of the line.
MISC.:
1. Scott Wiener drove Robin, Adrienne, and I out to Warren, NJ. During the day he gives pizza tours throughout New York City and at night he sleeps on a boat.

2. Paulie's got pizza fever. There was pizza everywhere. Not only did he invite me and a guy who gives pizza tours, but there was a copy of Ed Levine's SLICE OF HEAVEN on the coffee table, food network pizza specials on the TIVO and plenty of pizza related conversation (if you don't believe me, just ask Robin).

You are far too kind Sean. It was my pleasure having everyone.

FIVE stars......sounds like Paulie served you a LOT of limoncello :)

I have had the pleasure of being one of the lucky ones to have received an invitation to a pizza tasting at Paulie and Maryann's home. Every word of this blog is true. Actually, it is hard to find words to describe the experience of eating Paulie's pizza. It is a Pie of Dreams.

Thanks for making the day that much better. Would love to eat a pie with you one day soon. --K

LOVE the video recap Sean! I've seen so many photos of Paulie in action, it was great to finally see some footage of him working his magic!

Hope to grab a slice soon-