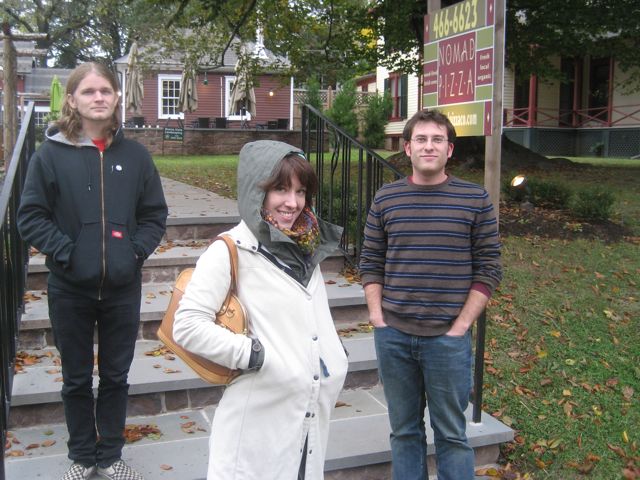 GUEST(S): Adam Kuban, Famdoc, Philip Given, Jason IDOP, Stacey Snacks, Ciao Chow Linda, Nick Sherman, Scott Wiener, Paulie Gee, Brownie, Cary and Lillian Steiner,, Brooks Jones, and Robin Rothman.
REVIEW:
Nomad...happy YES! What began as a wandering, oven-toating REO Speedwagon seems to have found a home in Hopewell, New Jersey. Owners Stalin Bedon and Tom Grim assure patrons that the 'wagon may be parked but it and the wood-fired payload are very much operational. But don't worry, citizens of Hopewell, there's a bigger, better oven inside??. Nomad serves high quality Neopolitan style pies that are all distinctly delectable. Any pizza fan will like them all but the question is, "which will you like best?" 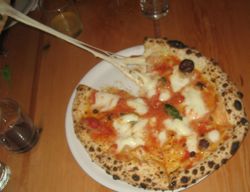 My favorite is the Margherita di Bufala. The wetter, more widely dispersed bufala cheese put the emphasis exactly where I want it: on the sauce. And, with the sauce at center stage, Nomad delivers! The San Marzano tomatoes and blend of sea salt, aged parmesan and organic olive oil created a rich, savory spread I crave even as I write. Simple, yet exquisite. 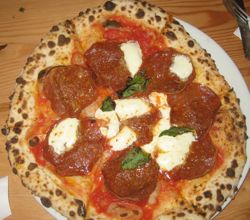 For the less sauce-centric, Nomad's got you covered. Literally covering the Margherita with locally grown arugula, prosciutto and/or pepperoni will all but guarantee a fresh new flavor some of my pizza guests called "heavenly." Two other signature pies, the Shitake Mushroom and Spicy Sausage, incorporate caramelized onions to enhance the consistency and provide a zesty aftertaste. Both of these were favorited by members of the table. And finally, there's the less-is-more Marinara pie. What it lacks in cheese it makes up for in crushed red pepper. Even the Marinara had its #1 fans.


Although I may prefer more sauce or advocate melting the fresh mozzarella more, Nomad has got the dough recipe down pat. Much like a snowflake, no two are exactly the same but they're all similar in that they're soft with golden brown spots, chewy, and tasty. The crust makes the bed for the top tier ingredients to sleep in. 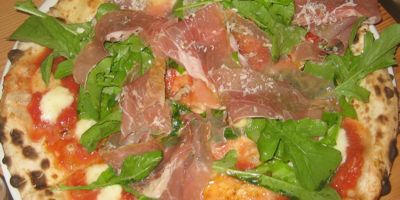 I admire Nomad's commitment to quality. I may not trek out to Hopewell anytime soon but you can bet that I'll be chasing after any REO Speedwagons that come my way.


MISC.:
1. Twelve food bloggers descending on a pizzeria on a single pizzeria in rural New Jersey did not happen accidentally. This was a field trip that was conceived online at sliceny by Paulie Gee. It was cool to finally meet other self-proclaimed "pizza freaks" such as Adam Kuban (founder of sliceny.com) and Scott Wiener (Scott's pizza tours). 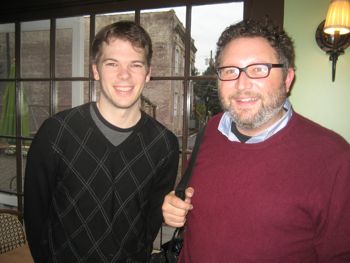 (Me and Adam Kuban)
2. Here are some blog entries of some others that came along the Nomad excursion:

3. I was also fortunate enough to meet the owners of Nomad, Stalin (yes, that's his name) Bedon and Tom Grim. 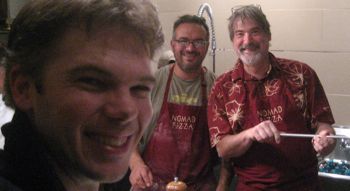 It was nice meeting you at Nomad.....I am enjoying your pizza month and your reviews.
I love Motorino, as well as DeFara, have you been to DeLorenzo's in Trenton and Robbinsville, NJ?
Tomato pie at its best! Hope you can get out there.
Stacey

Love seeing everybody again on that video. It's great being able to revisit the evening.