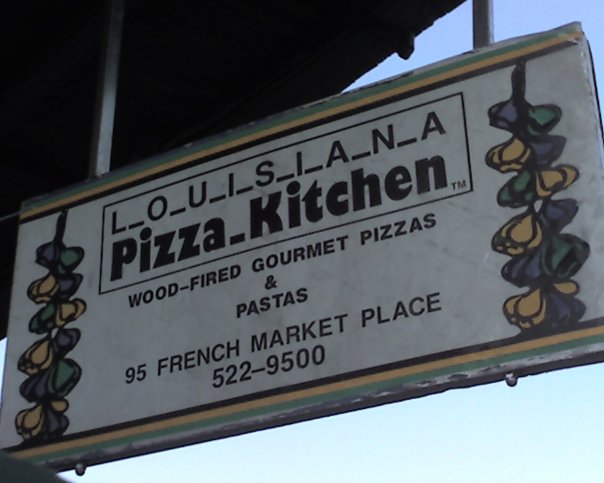 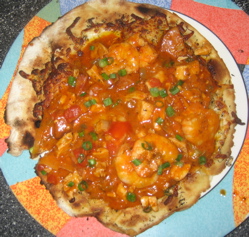 Jumping Jumbalaya! At the Louisiana Pizza Kitchen (LPK) expect gourmet traditional Cajun cuisine served on top of wood-fired brick oven baked pizza crust. A contribution from both Louisiana and Italy resulting in a flavor combination that is greater than the sum of its parts. I fork-and-knifed it to begin with but as my mountain of delicious Jumbalaya cooled it also congealed. Before I had finished my first slice I was not only able to pick up like a typical pizza, I was able to crease it like a New Yorker. Speaking of which, it sure would be nice to have an LPK open up in New York. In the meantime, I recommend everyone living or visiting the French Market in New Orleans to treat yourself to a gourmet Cajun style pizza at the Louisiana Pizza Kitchen. I use the word "treat" because, as with most Cajun style food, you want to focus on the taste, not the nutritional value.

MISC.:
1. I was unable to trade a slice with my vegetarian pizza guest but his "The Vegetarian" pie looked amazing. Our waiter confirmed that Cajun food rarely caters to vegetarians.

2. Alan Fessenden and I videotaped the post pizza section in Mississippi mud. Since the tide was low, we walked out into the Mississippi River and taped down by the rocks on the very mud that is used when rubbing down each and every single baseball that used in all Major League baseball games.

3. I rode a streetcar from our hotel to the French Quarter. It was a fun touristy thing to do. I say this because we probably would have arrived at our destination faster had we walked. The streetcar took awhile to come and when it did, it was too full to pick up any new passengers. As was the second and third cars that came. We eventually got one and, considering it must obey all traffic laws and never exceeds 20 mph, I don't recommend using them to "save time."

NOTE: This video is a part of the 2008 Pizza Video competition. 10 editors were given footage for 10 different "pizza days" and plenty of creative license. This video is for entertainment purposes only and does not necessarily reflect the views of the editor, Sean Taylor, or the pizza establishment.