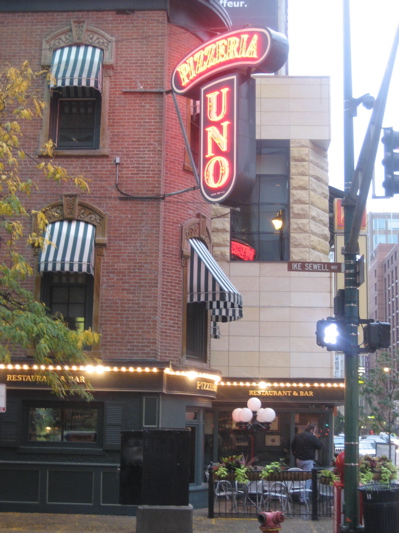 Who wrote the book on deep dish pizza? You know (or should I say, "UNO") the answer! In Ike Sewell's efforts in 1943 to develop a pizza that could serve as a "full meal", he (and his new pizzeria) wound up inventing an industry and christened a Chicago icon. Eventually, the UNO brand would make its way around the world many times over but never forget its roots. Nope, they're firmly planted on Ohio and Wabash where you can walk in, order a pie, and 45 minutes later, have a Chicago style thick crusted, chunky tomato and cheese filled "full meal" delivered to your table. This is deep dish pizza. Four of us were unable to eat one delicious half sausage, half cheese large pie. Sausage, on a Uno's pizza is not placed on top in chunks but instead makes up an entire layer of the foundation of the pie - so don't try "picking it off." Instead, just pass the slice over to me. I look forward to returning to the original Pizzeria Uno's but, in the meantime, I'll practice at my local franchise.

MISC.:
1. I met Ken Kowalkowski and Catherine Mayotte tonight. Ken is a Chicago native and loves deep dish pizza, Catherine is from Boston and doesn't think deep dish should be called "pizza."

2. Uno's is such a landmark that the road sign out front has been named after the owner, Ike Sewell.

3. I did the post pizza analysis at the bean in Millennium Park. It's a coffee bean shaped mirror-like art structure that I couldn't help but be fascinated by. 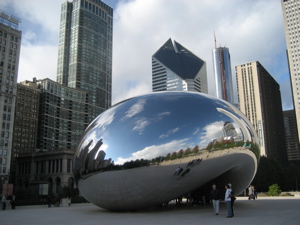 hooray for my Chicago friends! and that pizza looks fabulous.