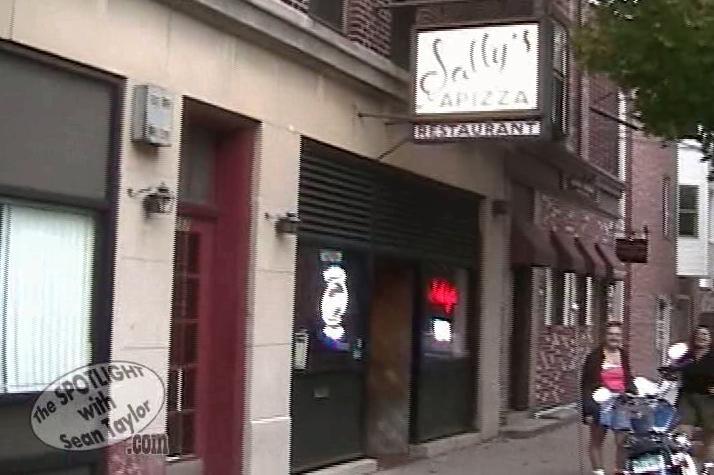 LOCATION: Sally's Apizza (111 Wooster St., New Haven, CT)
GUEST(S): Robin Rothman
ORDER: one slice of a small clam, 3 slices of a small plain, 2 slices of a small mozzarella pie
PIZZA REPORT: Before there was "pizza" there was the "tomato pie" and that is when Salvatore Consiglio began cooking it in his coal fired brick oven.  If you want cheese on your tomato pie, you have to order it.  Does it need it?  I don't think so.  The plain is served with the signature charred ring around the edge of the crust and tons of tomato sauce which has been seasoned to perfection (not too salty, not too sweet).  You won't be disappointed when you add cheese.  It's not much more money and the cheese is fresh mozzarella ("mootz").  Just to round out the experience, I also ordered a small clam pie, which is prepared without sauce or cheese.  This enabled me to isolate the thin coal fired crust which tastes like freshly baked bread and provides a solid foundation for shoveling toppings (whether it be clams or cheese or sauce) into my belly.
ATMOSPHERE: Sally's Apizza has been a staple in New Haven's Little Italy since 1938 and seemingly more popular than ever.  Locals come to expect the line down the block and the ridiculous wait that results from staffing the joint entirely by the very family that opened it all those years ago.  Despite the delay, the wait staff er waiter keeps a smile on his face which gradually spreads around the room.  The restaurant itself is cozy, kidfriendly, and inexpensive.  A small pie is enough to fill me up and only costs about $6.
VERDICT: 4.5 out of 5

MISC:
1. We met a guy named Vinny Esposito who was celebrating his 36th birthday at Sally's Apizza.  He informed Robin and me that the place spelled "APIZZA" is pronounced "ah-beats".  Later we also were told by the waiter that in New Haven "mozzarella" is pronounced "mootz".  2. New Haven regulars swear by Sally's and have been enduring the long wait and devouring the outrageously delicious coal fired Sally's pizza for decades.
VIDEO CLIP: http://www.youtube.com/watch?v=-Oiecjr0jF0
Posted by Sean Taylor at October 05, 2007