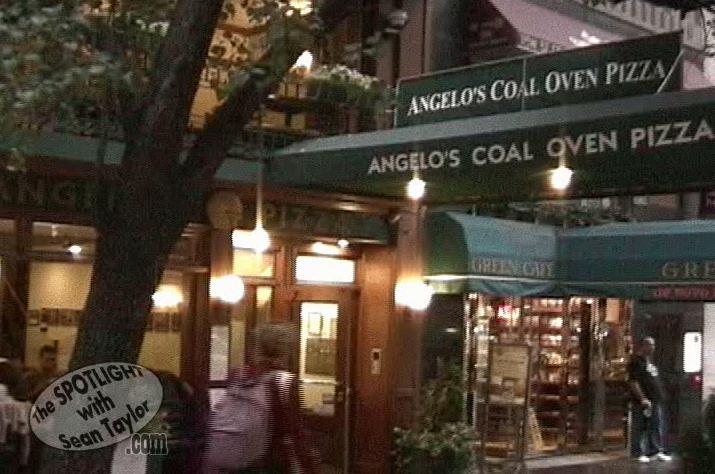 
GUEST(S): Dave Thunder, Jamey Shafer
ORDER: 2 slices of Pepperoni
PIZZA REPORT: Oh so familiar. I closed my eyes and sunk my teeth into the coal fired brick oven crust topped with fresh mozzarella cheese and hand cut pepperoni. I had smelled this seasoned tomato sauce before. When it reached my taste buds, the deja vu was confirmed. I said aloud, "aha! I'm at Patsy's Pizzeria!". I opened my eyes but instead of seeing reassuring head nods on my friend's impressed faces, they reminded me that we were in Angelo's. To keep my sanity, Jamey explained that Angelo's and Patsy's were owned by the same family. He wasn't just saying it either. I don't know why you would sell the same pizza at two different places but I am excited to know that there are now two more locations I can go for my favorite pepperoni pizza.
ATMOSPHERE: I have yet to visit the Angelo's located at THE LATE SHOW WITH DAVID LETTERMAN but if it's anything like the two story, clean, perfectly staffed 57th street locale, I can't wait. Letterman and pizza are two of my favorite things. Given the central location, the higher cost ($18-25 w/o alcohol) and the balcony on the second floor overlooking 57th street, it is safe to say that Angelo's caters to a more touristy and family oriented crowd.
VERDICT: 3.5 out of 5

MISC:1. I performed in my first ever musical show as our graduation from the Made-Up Musical class offered at the Magnet Theater. I recommend it. If you want to look before you leap, check out a performance of the actual show - Made-Up Musical, before you sign up. My class is pictured at the end of the video clip.
2. Jamey Shafer and Dave Thunder are coincidentally two of the people that have the most familiarity with video cameras that I know...so I had a chance to be in front of the camera more often then usual. That's not always a good thing.
VIDEO CLIP: http://www.youtube.com/watch?v=v0WSUucQiLA