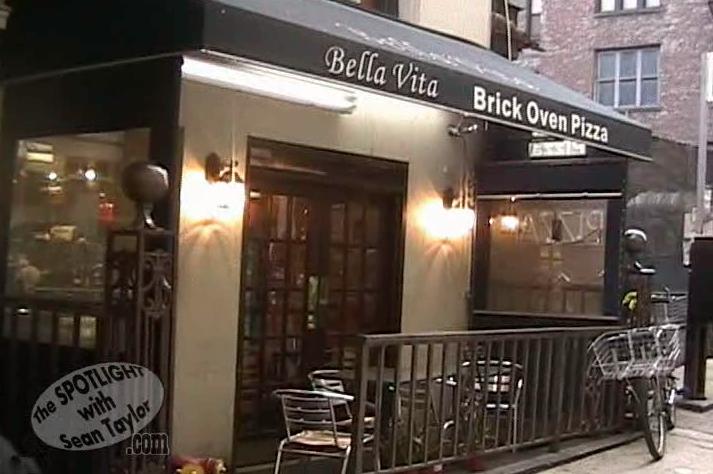 
GUEST(S): Matthew Shafeek, Shawn Amaro, Robin Rothman
ORDER: 1 slice of cheese, 1 slice of pepperoni
PIZZA REPORT: Look before you eat! Bella Vita sells pizza by the slice and cooks all of their pies initially in a gas powered brick oven...which is good. However, if pizza does not sell, they keep it on the counter. I had one relatively new slice (the pepperoni) and one old slice (the cheese). This made a world of difference. The pepperoni was vibrant and the sauce was copious and delicious whereas the sauce on the cheese was partially evaporated and virtually tasteless.
ATMOSPHERE: Finally an answer to the question "Where can I get a good slice of NY pizza in midtown?" Bella Vita is a mere one block South of Central Park just North of Times Square and Rockefeller Center. Sure it is a little more expensive and there are only a few seats but any other slice place in that area is going to sit heavy and leave plenty of orange oil dripping down your sleave. If you think that's NY pizza, then I'm sorry. Try a slice at Bella Vita and you'll taste the difference.
VERDICT: 3 out of 5

MISC:1. Matt Shafeek wisely points out what may be in the ponds in New York's Central Park.
2. Putting a tone over audio in a video makes it seem like you're cursing.
3. I'm not sure how to pronounce the "Vita" part of "Bella Vita"
VIDEO CLIP: http://www.youtube.com/watch?v=L28VT6prBXg