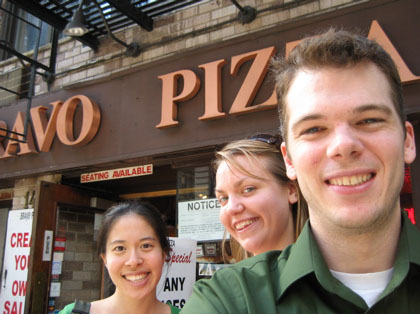 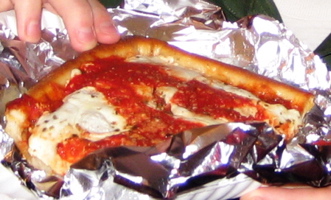 PIZZA REPORT: Bravo!  I got a slice of a fresh mozzarella Sicilian pizza that was good and heavy.  The crust was perfectly uniform around two edges (I had a corner slice) and sturdy enough to hold the weight of the densely packed tomato sauce and fresh mozzarella cheese.  These component parts plus a subtle spicy kick made for a very tasty slice of grandma.   One of the drawbacks of the slice was that due to the weight, it sort of sits heavy in your stomach.  Also, the pizzas move in and out of oven with the aid of cornmeal which is gravel-y.  I know this because I thought I bit into a rock but turned out to be cornmeal.  So, beware. The slice cost $2.50 which I think was fair.  After all, a single Sicilian corner slice filled me up.  If I'm in the area, I may stop in to Bravo for an Encore!
ATMOSPHERE: From the street, Bravo Pizza looks like a small takeout place but, as with trannies, looks can be deceiving.  This place extends back fifty feet further than I thought.  It opens up into an air conditioned seating area with cushy chairs and soft music.  Bravo is designed to accommodate the lunch rush.  The employees' tasks are broken down in an assembly line manner where the order is taken, the slices are heated, the drinks are poured and the money is paid by four separate people.  Hustle and bustle is in the air.  The perfect place for a quick lunch but don't stay too long, other folks need the seats.
VERDICT: 3 out of 5

MISC.: After lunch Alexis Saarela and Dot Lin and I discussed skateboarding, family reunions, and touched on Patrick Swayze.

Click to play in your browser
Posted by Sean Taylor at October 03, 2006