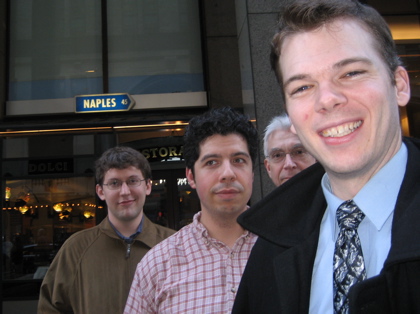 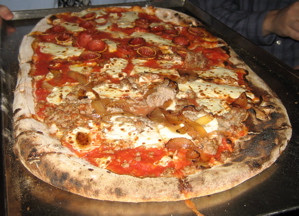 PIZZA REPORT: Delizioso!  That's "delicious" in Italian (according to an online English-to-Italian dictionary).  I went with Italian because that's what Naples 45 does.  Everything from the ingredients, to the type of oven, to the shape is authentic Neopolitan pizza.  The "DOC" in the slices of Margherita DOC I consumed stand for "d'orgine controllata" and certify that the fresh mozzarella cheese came from the unpasteurized milk of Italian buffalo raised in Campania and the tomatoes in the sauce were harvested from the rich volcanic soil on the slopes of Mt. Vesuvius.  Furthermore, the seal further verifies that the pizza was cooked at around 900' F in a wood burning oven on hand crafted rounded crust composed of exact specifications of flour and yeast.  My Margherita slices, as pictured above were lacking a bit in the cheese department but more than made up for it in volcanic sauce.  The outer edge of the pie is rather large but the taste of the crust alone rivals that of freshly baked home made bread.  The pepperoni slice was another mouthwatering experience.  All the flavor of the Margherita with some spicy hand cut pepperoni. Delizioso, indeed-o!
ATMOSPHERE: A high class cafeteria.  During lunch hour, the place becomes a hangout for loud-talking businessmen.  Since Naples 45 is open and can seat hundreds at a time the noise level can be a bit high, particularly for the rather high cost.  But as it cleared out, the unique layout of the "ristorante" began to reveal itself.  On top of being pristinely clean, the outdoor patio and wood burning ovens scattered throughout (each with its own name) really make Naples 45 a place to visit.  It's not cheap though - a fair amount of pizza and a coke will run you about $20.
VERDICT: 4.5 out of 5

Click to play in your browser
Posted by Sean Taylor at October 16, 2006