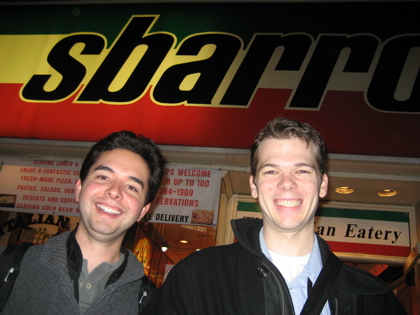 LOCATION: Sbarro (33rd St and 7th avenue, NYC)
GUEST(S): Josh Fulton
ORDER: 1 slice of cheese
PIZZA REPORT: Sbarro anywhere outside NYC is probably the closest thing to a NYC slice around.  Unfortunately, I had it in NYC.  While my slice had a very nice blend of spices within the sauce, there was hardly enough sauce to go around.  The cheese (shredded mozzarella) was ok but a little too concentrated in the center.  This meant aside from the bubble in the center, it was overly cheesy in the middle at the expense of the outer areas of the crust. Speaking of "expense", $3.24 (tax included) for a slice of cheese is a bit steep. For that price, I want better sauce and cheese distribution.
ATMOSPHERE: As for ambience, the Sbarro is a lot bigger and cleaner than it appears from the outside.  There is a downstairs that looks out into the subway platform which I think is pretty neat.  Unfortunately, the proximity to the "subway heat" elevates the temperature of the pizza place almost as high as the volume of the music.  I did like the songs being played (80s-00s pop/rock) but had difficulty hearing across the table.  Sbarro is also a 'fly-friendly space'.  Don't know whether it was the warmth or the music selection that attracted the flies, but I doubt it was the pizza.  It is not easy to be the first pizza joint of Pizza Month 2006 but, needless to say, Sbarro didn't set the bar-o too high-o.
VERDICT: 1 out of 5

MISC.: In the audio file below, Josh Fulton and I discuss Sbarro, his Canadian-ish accent, and my mom before I had to leave for The Academy show (Sundays at 8p @ the Magnet).

Click to play in your browser
Posted by Sean Taylor at October 01, 2006