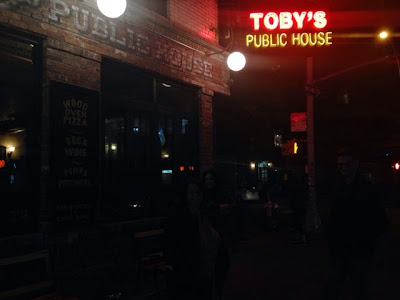 REVIEW:
Top tier pizza and beer.  Just north of Little Italy one might catch a glimpse of Toby's Public House, a new Manhattan outpost of the original beloved Brooklyn pizzeria.  Though comparisons to the original oven at the Greenwood Heights location are inevitable, the same signature high quality pies and top-flight beers are being served.  Rest assured that if you are at Toby's, everything you eat or drink will be of the highest caliber.  All of the pizzas at the Kenmare site are cooked in a uniquely-fashioned  wood-fired brick oven with two openings.  You won't be disappointed with what emerges from either side. Expect copious amounts of creamy fresh mozzarella cheese, rich tomato sauce, diced basil and a crisp lightly-charred crust on the Margherita.  Many of the signature pies combine these and other high quality ingredients in unique and creative combinations to create unforgettable results.  I recommend going with several friends so you have more opportunities to order something traditional and something on the more creative side of the menu.  Pair your pies with a traditional public house brew and you have the perfect end - or beginning - to a New York night.

MISCELLANEOUS:
1. I met Clif Henning for the first time today.  He's from the Philadelphia area and got introduced to the New York City improv community via UCB sketch comedy.  Now he performs on Team Ralf at Nick Feitel and Amey Goerlich's Supernova.
2. Shaun Farrugia is also on Team Ralf and recently learned how to code iPhone apps.
3. Charone Frankel, Scott Friedstein, and Gina Annunziato perform on Team Kermit.  I'm also on that team.  We perform at the Brit Pack theater and figured we would go to a nearby bar for post show drinks.  Given our proximity to Little Italy, we opted for Toby's Public House.  Even though I had already had my requisite pizza for the day, I couldn't resist the temptation of good wood-fired brick oven pizza.
4. Gina Annunziato sings in a weekly karaoke competition, just started a new job at Fox News, and claims she'll be inviting Team Kermit to her apt one day for a party.
5. Scott has great taste in craft beer.
6. Charone played my cellmate in our show tonight.