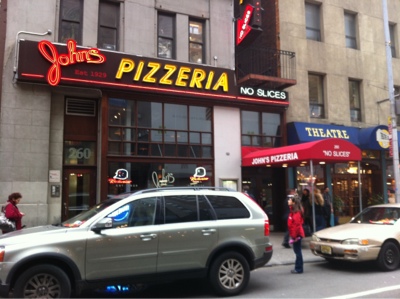 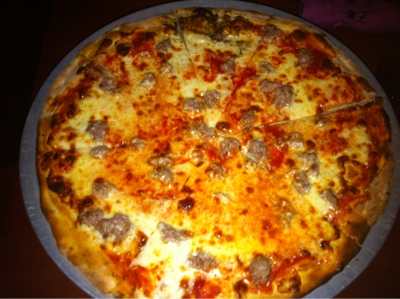 King of the coal ovens.  Less than a block from Times Square on Broadway's Great White Way, John's Pizzeria sports not one but four coal-fired ovens in this exquisitely renovated ex-cathedral.  Whether looking for a family friendly Italian restaurant or looking to meet up for a slice in a central locale, John's two story high spacious dining area and bar are happy to accommodate.  I recommend getting the Italian sausage pie since the meat tastes fresh from the butcher and the savory tomato sauce complements the meat with rich zest.  Ask for extra sauce since it was used rather sparingly on my slice.  I would also recommend upgrading to fresh mozzarella cheese since the default low moisture mozzarella is not the same caliber as the sausage it surrounds.  Regardless of the toppings, the crust at John's Pizzeria midtown is cooked masterfully.  The dough is stretched uniformly thin, and cooked under the watchful eye so as to char without burning the outer edge and crisp up the underside for a firm-yet-chewy pie that passes the folding test with flying colors.  I will be back...often.

MISCELLANEOUS:
1. Ruby and I both know politics is not a great talking topic but this close to the election, it's practically inevitable.
2. We went costume shopping after we ate.  Ruby is going as Snow White and I'm going as Dexter.
3. Broadway is open for business post Hurricane Sandy.  It's nice to see the lights on Broadway! 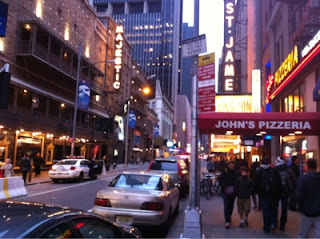 Thus ends Pizza Month 2012. Thank you, everyone who made this possible! 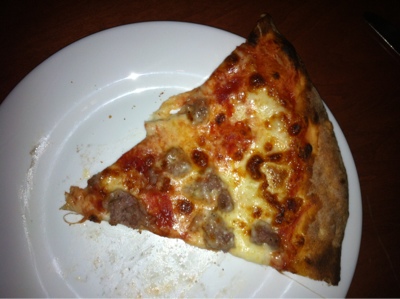 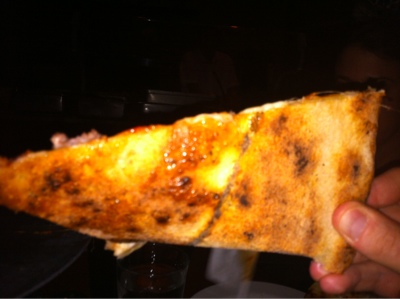 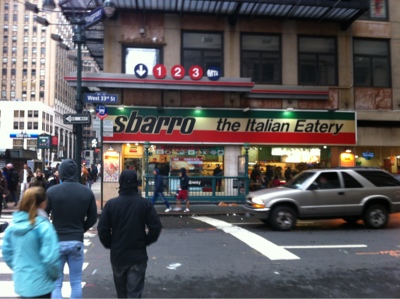 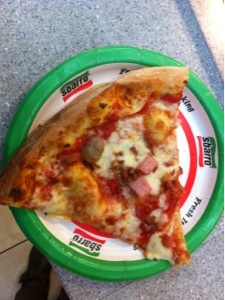 Mall pizza.  Outside of New York City, Sbarro may be the closest thing to a NY slice around.  Although the fifth largest pizza chain in the country began in New York City,  I fear the size has come at the expense of the product.  This branch sits strategically between Madison Square Garden and the Empire State Building and likely relies on name recognition from the heavy foot trafficked Penn Station to stay in business in a city of better, less expensive pizzerias.  I opted to sit in the spacious downstairs dining area next to the subway platform and ordered a Meat Delight which consisted of several types of pork toppings including juicy chunks of ham, bacon bits and sweet sausage.  According to the menu on the corporate website, the slice should have included "zesty pepperoni" as well.  These toppings combined with the creamy low moisture mozzarella cheese and flavorful tomato sauce made for a decent slice.  The outer edge and underside seemed a bit underdone and over-bubbled.  I do appreciate that Sbarro was open considering the MTA shutdown in the aftermath of Hurricane Sandy but considering the steep price tag per slice, this is far from a charitable endeavor.  I can't promise I won't go back to a Sbarro in a Mall or airport but I doubt I will return to this branch without a coupon.

MISCELLANEOUS:
1. Michael McLarnon spent the storm finishing CHEERS.  Yes, he's seen all 275 episodes of Cheers.  Apparently they're all available on Netflix.
2. Michael McLarnon rode his bike to the pizzeria since the MTA is shutdown. 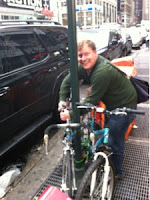 3. Michael McLarnon has his phone set on military time.
3. Robin does spot on impression of Natalie Merchant's voice.
4. Before we settled on Sbarro, Robin and I walked around West Manhattan assessing the damage we could see.  In addition to the power being out from about 25th Street southward, we came upon the apartment building with the missing facade on 14th St. and 8th Ave. 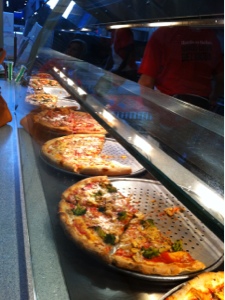 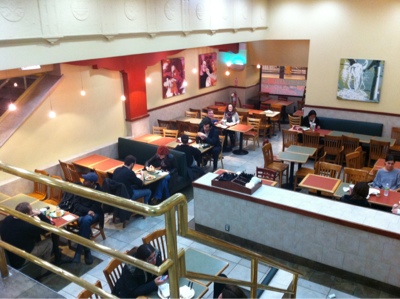 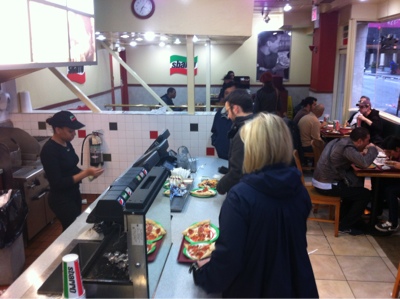 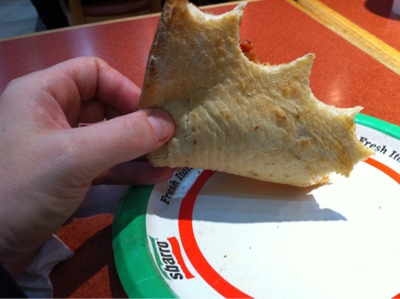