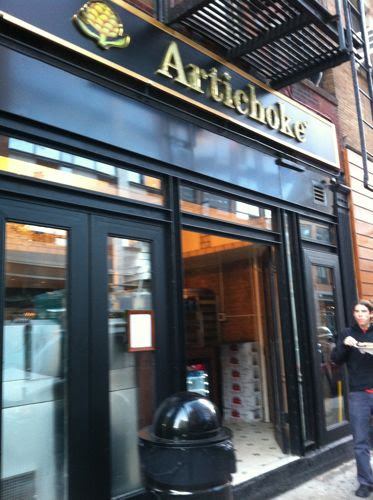 ORDER: one slice of Artichoke 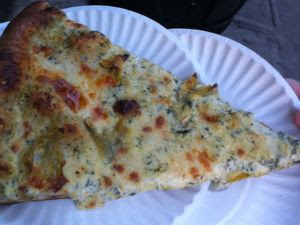 Rarely is the encore better than the play, but the new Basille pizzeria in the West is proving that Artichoke gets better with age.
Back in 2008, Francis Garcia and Sal Basille opened up a storefront selling two unusual pies, two traditional ones, and one big mouth Budweiser...nothing more - not even seats! Was it enough? Soon thereafter, the owners had their answer in the form of lines. Long lines of people, every night, all night. So long, going to Artichoke became an event in itself. An event with a happy ending. 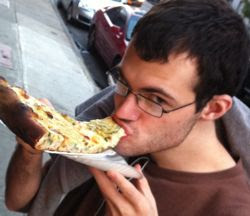 It appears as if the High Line won't be the only "line" on the West side of Manhattan. The new Artichoke location has both a sit down pizzeria in addition to the familiar line-inducing storefront selling the same four pies...and beer.

I opted for the moneymaker itself...the Artichoke slice. Five bucks may seem a bit steep for a single slice, but it's huge. That, and after one bite you will taste why people queue up nightly for the creamy, savory goodness. Reminiscent of a dipping bread in a hot spinach and artichoke dip, you won't hardly miss the lack of tomato sauce. If you do, just order the Margherita in either Neopolitan (triangle) or Sicilian (square) style.

See you in line!

MISCELLANEOUS:
1. Rick Andrews and I perform together in an improv group called Hell Buffalo and have shows Fridays in October at the Magnet Theater.
2. This new location underlooks (yeah, I made up a word) the High Line Park which is a park created on the abandoned railroad tracks originally constructed to lift freight trains off the street.
Posted by Sean Taylor at October 08, 2010