REVIEW:
Sauce Ahoy! Borrowing its name from Italian sailors and the herb-infused red sauce they became known for, Marinara’s is the latest vessel to land in the Upper West Side with great slices in its hull. Keeping with the nautical theme, the "head" (bathroom) is for the crew only. Fortunately, the pizza is for everyone. In this location (one of four in Manhattan), a long glass counter greets patrons filled with squares both thick and thin, traditional and experimental, as well as classic NYC street slices. You want ‘roni cups, they got 'em. Gluten free cauliflower crust - yup! Even cream cheese and lox pizza? Marinara’s has you covered. With so many choices, I opted for the ones with marinara sauce. The triangular Margherita combined ample amounts of savory tomato sauce with a good helping of fresh mozzarella cheese, a drizzle of olive oil and just the right amount of shredded basil upon a uniformly thin-yet-sturdy crust. Since the toppings extended from tip to edge, every single bite was packed with flavor. I did not even require the cheese, pepper and oregano condiment shakers widely available. Same was true for the square “MVP.” With stripes of marinara, vodka and pesto sauces on the guiltlessly thin grandma crust, get a few. I'm told leftovers reheat well but at Marinara’s, don’t expect to have any. 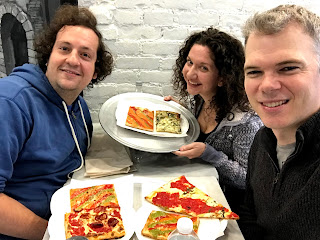 1. Jon Bander and Angela DeManti are hilarious.  Although we all share an improv background, Jon Bander has taking his characters to the next level.  Not only does he perform them at character showcases, he also teaches a class in it at the UCB.

2. Angela is a published writer.  If you want a good laugh check out Angela's Reductress articles.